Eyes on the prize: Greg Hackney has his sights on a new Elite AOY points record. Photo by Joel Shangle.

Greg Hackney has reason to celebrate in 2016. Photo by Joel Shangle. 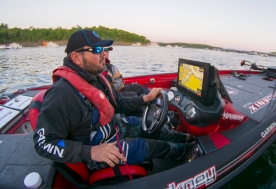 Greg Hackney rolled out for action on Bull Shoals. Photo by Joel Shangle. 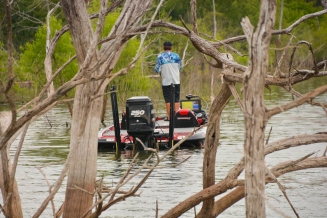 Greg Hackney has worked his way through a phenomenal 2016 season. Here at Lake Ray Roberts. Photo by Joel Shangle.

The Hack Attack might be hugging it out with another AOY trophy soon. Photo by Joel Shangle.

Greg Hackney throwing them in at a record pace through six tournaments. Photo by Joel Shangle.

Looking ahead: Hackney is pretty good at catching smallies, too, as Mille Lacs approaches. This from last year’s AOY at Sturgeon Bay. Photo by Joel Shangle.

TERRELL, Texas – Just how dominant has Garmin pro Greg Hackney been during the 2016 Elite Season? Well, just THE most dominant ever.

After six events – punctuated by Hackney’s win at BASSfest on Lake Texoma – the “Hack Attack” is comfortably perched atop the Toyota Tundra Bassmaster Elite Series Angler of the Year standings with 572 points. Even more impressive, though, is his performance this year compared to 2015 AOY Aaron Martens’ record-breaking run.

Martens shattered the previous record with 775 points last year, a season that was rightfully heralded as the best of all time. At this same point in the 2015 season, Martens had 518 points and had finished an average of 17th in the six events fished. He finished the year with a per-tournament points average of 86.11.

Hackney has averaged a 16th-place finish and 95.33 points per event in 2016. His extrapolated AOY points total for 2016 based on that number is an astounding 858!

Now, of course there are some caveats to that. AOY per-tournament averages drop as the season progresses, and Hackney would have to maintain a pretty phenomenal pace to eclipse the 800-point mark. But with four shallow fisheries left in the schedule – Cayuga Lake, the Potomoc and Mississippi rivers and Lake Mille Lacs – should we really expect any less of Hackney?!?

Here’s a look at the Hack Attack’s 2016 campaign through the Bass Nomad lenses.
-Joel Shangle